It's not Brain Surgery

Well, actually it is.

A little over two weeks ago my husband collapsed at work, which prompted a trip to the ER to find out why. After a CT scan, the doctor came back to say they found something.

After many hours on the phone, internet, and in the doctors' offices it was confirmed that he has a Meningioma, which after Google-ing is a tumor, slow growing, mostly benign, and needs some type of treatment. 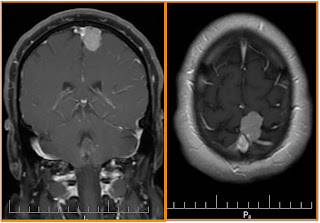 This is his MRI Scan and the lighter mass is the Meningioma.  It is about the size of a golf ball and pressing down onto his brain which is causing his headaches (which he has had for over two years).  The Surgeon gave us three treatment options:  1.  leave it in and come back in for another MRI in three months to see how aggressive it is growing.  2. Radiation, which would kill the growing tumor cells but not decrease or shrink the size of the mass, it may also cause other small tumors in the radiation path.  3.  Surgery to take out the tumor, and possibly prevent them from growing (80%).

After a few days of going over the options, we have decided on surgery.  I have made the call in to schedule it and we are waiting for a day.

Not an easy subject to approach...what would happen if one or more of us met an untimely demise? Who would take care of my kids, the house, education, finance, etc.

About a week ago, my nephews' mom was in an accident that left her in the hospital for over a week...that struck up a conversation between the hubby and I. What if it were my brother, Dusty, who was in the accident..who would take my nephew? And we both agreed that we would take him in a heartbeat. But is that what Dusty would want?

And that off course brought up the question....what would we want for our kids? How can we be sure that they are taken care of. So I am off in search of completing a Will.


Any ideas on what to 'not forget about'?

Posted by Christina at 8:14 PM 0 comments

Labels: Will and Testiment

I hate writing...I am no good at it. It takes me so very long to write anything...

I don't send cards because the inside 'thank you' note terrifies me. But I love blogging.

I scrapbook, and dread the journaling. But I love sharing a story.

So my plan is to no longer write...I am going to talk and type. It might not make any sense and be jarbled of meaning...but I am going to start "just talking".


NaBloPoMo's subject matter for March is "In A Word" and it's a start! Want to play along!!